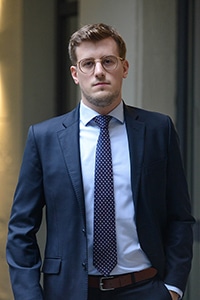 Master in Law, University of Fribourg
Attorney at law, admitted to the bar

In this context, he spent 6 months at the Global School of Law in Lisbon, Portugal. Parallel to his studies, he held a position as legal advisor at the Swiss Patients’ Federation in Fribourg.

Following his studies, he worked as a clerk trainee at the Justice de Paix du district de la Sarine, in Fribourg. He then worked for one year as a jurist at the Swiss Institute of Comparative Law in Lausanne.

In 2018, Mr. Sylvain Tscheulin began his legal internship with the law firm Leximmo and passed the Bar in July 2020. Since then, he has been practicing at the same law firm.