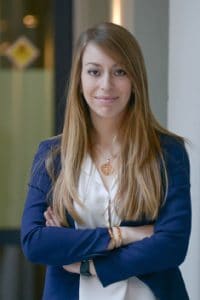 Master of law, University of Lausanne
Attorney at Law admitted to the bar

After graduating, Claudia Couto also worked for several years as a clerk in the Arrondissement Court of Lausanne, in the family law Chamber, the pecuniary affairs Chamber and prosecution law Chamber. She then joined, still as a clerk, the Cantonal Patrimonial Chamber.

Bulding on her various experiences in courts, Claudia Couto completed her lawyer traineeship in the law office Leximmo and passed the bar exam in 2016. Since then, she has been practicing as an attorney-at-law in that same office.

In parallel with her work as a lawyer, Claudia Couto also serves as a judge in the Prud’hommes Court of Vevey.

Above all else in search of the best solution for her clients, Claudia Couto is close and attentive to them; she offers them quality advice, a keen sense of analysis and a significant availability; she supports them through all the necessary steps to defend their interests.